In 1973 minister Pronk took office as a member of the government as a minister without portfolio (Directorate General International Cooperation as part of the Ministry of Foreign Affairs) he came up with a list of target countries for development aid. This included - for the first time - three Arab countries: North Yemen, Sudan, and Egypt. In December 1977 Minister de Koning took office and an agreement was signed in 1978. (ref. Fifty years of Dutch development cooperation 1949-1999).

Technical cooperation between The Netherlands and Yemen started in 1978 based on a first agreement signed on 3-10-1978.

"Agreement on technical cooperation between the Kingdom of
The Netherlands and the Yemen Arabic Republic.

The Government of the Kingdom of the Netherlands, and the Government of the Yemen Arabic Republic;
Reaffirming the friendly relations existing between the two States and their peoples;
Firmly desiring to intensify these relations;
Desiring to promote technical cooperation, and to create for that purpose the necessary legal and administrative framework;

The agreement of 1978 and other agreements between the Kingdom of The Netherlands and the Arabic Republic of Yemen concerning technical cooperation: 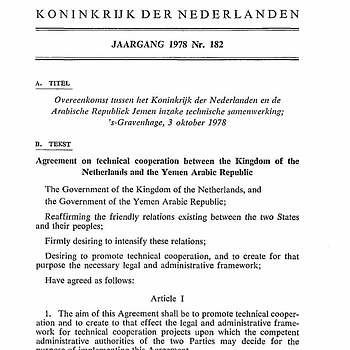