The United Nations Decade for Women (1976-1985) proclaimed by the General Assembly launched a new era in global efforts to promote the advancement of women by opening a worldwide dialogue on gender equality.

The first world conference on the status of women was convened in Mexico City, Mexico to coincide with the 1975 International Women's Year, observed to remind the international community that discrimination against women continued to be a persistent problem in much of the world.

The Conference, along with the United Nations Decade for Women (1976-1985) proclaimed by the General Assembly five months later at the urging of the Conference, launched a new era in global efforts to promote the advancement of women by opening a worldwide dialogue on gender equality.

At this conference, three objectives were identified in relation to equality, peace and development for the Decade:

The Conference urged Governments to formulate national strategies, targets and priorities. It led to the establishment of the International Research and Training Institute for the Advancement of Women (INSTRAW) and the United Nations Development Fund for Women (UNIFEM), both of which were later merged, along with two other UN entities, in 2010, to form UN Women. At the 1975 conference, women played a highly visible role. Of the 133 delegations from the Member States, 113 were headed by women. Women also organized the International Women's Year Tribune, which attracted some 4,000 participants, and a parallel forum of non-governmental organizations that signaled the opening up of the United Nations to non-governmental organizations, which enable women's voices to be heard in the organization's policy-making process. 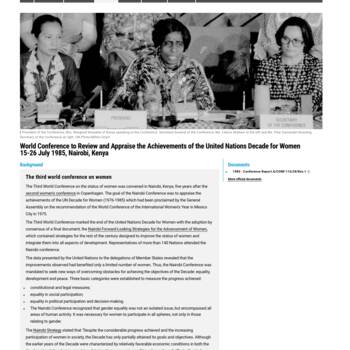