On this page you can find definitions of frequently-used concepts in the gender timeline. Some of these concepts are also explained in the infographics below (scroll through them to see more).

Empowerment: Empowerment is a process, enabling people to make choices and convert these into desired actions and results. In doing so, people take control of their own lives, improve their own position, set their own agenda, gain skills, develop self-confidence, solve problems, and develop self-sufficiency. Empowerment leads to genuine participation of all actors as it is a process of gaining self-confidence for individual development as well as to contribute towards development of others.

Feminism: Feminism is a range of socio-political movements and ideologies that aim to define and establish the political, economic, personal, and social equality of the sexes. Feminism incorporates the position that societies prioritize the male point of view, and that women are treated unjustly within those societies.

Gender: Refers to socially constructed and therefore learned roles and responsibilities ascribed to men and women, girls and boys based on their sex. Gender is thus not the same as sex, but comprises the expectations, roles, attitudes and behaviours of women and men. Gender roles change over time and vary within and between cultures, societies and classes.

Gender awareness: Awareness of the socially determined differences between men and women (and boys and girls) and how these differences affect their opportunities.

Gender balance: Equal participation of women and men in all areas of work, projects or programmes.

Gender barriers (or constraints): The difficulties experienced by women (or men) because of their gender.

Gender bias: Prejudiced actions or thoughts based on gender-based perceptions that women are not equal to men. The unfair difference in the way women or men, girls and boys, are treated.

Gender blindness: Gender-blindness refers to the failure to identify or acknowledge differences on the basis of gender where it is significant. Projects, programs, policies and attitudes which are gender blind do not take into account the different roles and needs of men and women. They maintain or reinforce the status quo and will not help transform the unequal structure of gender relations.

Gender discrimination: Gender discrimination is defined as: “Any distinction, exclusion or restriction made on the basis of sex which has the effect or purpose of impairing or nullifying the recognition, enjoyment or exercise by women, irrespective of their marital status, on the basis of equality of men and women, of human rights and fundamental freedoms in the political, economic, social, cultural, civil or any other field.” [United Nations, 1979. ‘Convention on the Elimination of all forms of Discrimination Against Women’. Article 1]

Gender equity: Gender equity involves fairness in representation, participation, and benefits afforded to males and females. The goal is that both groups have a fair chance of having their needs met and that they have equal access to opportunities for realizing their full potential as human beings. To ensure fairness, measures must often be used to compensate for existing disadvantages preventing women and men from operating on a level playing field. Gender equity strategies can be seen as temporal in the processes to achieve full gender equality.

Gender gap: The gap in any area between women and men in terms of their levels of participation, access, rights, opportunities, remuneration or benefits.

Gender impact assessment: Examining policy or programme/project proposals to see whether they will affect women and men differently, with a view to adapting these proposals to make sure that discriminatory effects are neutralised and that gender equality is promoted.

Gender indicators: Gender indicators are performance indicators that help assess or measure the effects of a policy, programme or project on changes in gender relations and the status of men and women, and hence the extent of advancement of gender equality and/or women’s empowerment. Gender indicators can be quantitative and qualitative.

Gender issues: Any issue where relations, differences, connections and/or inequalities between men and women have either a positive or negative effect or influence.

Gender mainstreaming: This is the process of systematically recognizing and taking into account gender issues (such as differences between the conditions, roles and needs of women and men) within policies, programmes and projects, covering design, implementation and Monitoring & Evaluation. Gender mainstreaming also takes into account the likely implications for men and women of planned interventions, in order to reduce gender gaps and increase gender equality.

Gender negative: A project, programme or policy is gender negative when gender inequalities are perpetuated, reinforced or increased.

Gender neutral: Having no differential positive or negative impact for gender relations or equality between women and men.

Gender norms: Gender norms are ideas about how men and women should be and act.  We internalize and learn these ‘rules’ early in life. This sets up a life-cycle of gender socialization and stereotyping.

Gender roles: Gender roles refer to social and behavioural norms that, within a specific culture, are widely considered to be socially appropriate for individuals of a specific sex.

Gender stereotypes: Gender stereotypes are preconceived ideas whereby males and females are arbitrarily assigned characteristics and roles determined and limited by their sex. Sex stereotyping can limit the development of the natural talents and abilities of boys and girls, women and men, their educational and professional experiences as well as life opportunities in general.

Intersectional Feminist Foreign Policy: This is the approach that places climate, economic, gender, racial and social justice at the heart of a country’s foreign policy, prioritizes decolonization and puts the voices of those who have historically been least represented, and are often most impacted, at the centre of policymaking. To be credible and effective, any IFFP needs to be complemented by intersectional feminist domestic policy.

LGBTI+: Acronym to name the several groups that consider and describe their gender and sexuality as mainly non-heterosexual and often non-conforming to heteronormativity or being cis-gender. Also described as the Rainbow community, who are a.o. Lesbian women, Gay men, Bisexual, Transgender, Intersex. The + sign is often used to shorten the expanding acronym and points to a.o. Asexual and Pansexual persons. The acronym is not exhaustive and holds the wish to be inclusive.

Masculinity / masculinities: The set of attributes, norms, values, behaviour patterns and attitudes that are characteristic of men in a particular society at a given time. There are differentiations in masculinity due to factors such as social class, ethnicity, sexual orientation, or belonging to different groups or sub-cultures.  Masculinities thus refer to patterns of conduct linked to men’s place in a given set of gender roles and relations.

Practical gender needs: Practical gender needs (PGNs) are identified within women’s socially defined roles, as a response to an immediate perceived necessity.  PGNs usually relate to inadequacies in living conditions such as water provision, health care and employment, and they do not challenge gender divisions of labour and women's subordinate position in society.

Productive work: Labour that results in goods or services that have monetary value in the capitalist system and are thus compensated by the producers in the form of a paid wage, or otherwise results into (monetary or in kind) income. Productive work includes subsistence agriculture and homestead production.

Reproductive work: Labour that is associated with the private sphere and involves anything that people have to do for themselves that is not for the purposes of receiving a wage or producing goods. It includes cleaning and repairs, cooking, care, and fetching water and fuel. Reproductive work is also referred to as ‘unpaid care work (UCW)’ or ‘domestic work and care’.

Sexual and Reproductive Health and Rights (SRHR): Human rights that guarantee self-determination and autonomy over one's own body. Especially women's SRHR have been a main issue of the feminist movement, for they are constantly under threat by conservative and/or orthodox-religious movements. These rights mostly consider the possibility to decide when and if one wants sexual relations, when and if one wants to become pregnant and have children, menstrual hygiene and all (medical) care involved. Feminism sees that in a patriarchal system women's bodies are considered as the possession of men, therefore the patriarchy should be dismantled to obtain full SRHR.

Strategic gender needs: Strategic gender needs (SGNs) or interests are identified as a result of women’s subordinate social status, and tend to challenge gender divisions of labour, power and control, and traditionally defined norms and roles. SGNs vary according to particular contexts and may include such issues as legal rights, domestic violence, equal wages, and women's control over their bodies.

Unpaid care work / Domestic care and work: Unpaid care work refers to all unpaid services provided within a household for its members, and includes caring for children, elderly and sick people, and domestic tasks as washing, cooking, shopping, cleaning and helping other families with their chores. Unpaid care work is reproductive work.

Women's economic empowerment (WEE): Economic empowerment is the capacity of women and men to participate in, contribute to and benefit from growth processes in ways that recognise the value of their contributions, respect their dignity and make it possible to negotiate a fairer distribution of the benefits of growth. Women’s economic empowerment increases women’s access to economic resources and opportunities including jobs, financial services, property and other productive assets, skills development and market information.

Women's empowerment: The process that women get more control over their own life. The following three dimensions are commonly distinguished:

Women's physical empowerment: The right of women to safety and security, access to proper health care and reproductive health services, and the ability to resist violence. This also includes access to adequate nutrition and WASH facilities (drinking water, sanitation and hygiene) and the absence of physical overburdening.

Women's political empowerment: The capacity of women to organize one self and others, to take part in society and its democratic processes, to make one’s voice heard and have the opportunity to influence decision-making. This applies to all levels, from local level (such as community-based organizations) to national and global level.

Women's socio-cultural empowerment: The capacity of women to have their own independent identity, a positive self-image and social status as an individual and as a group. 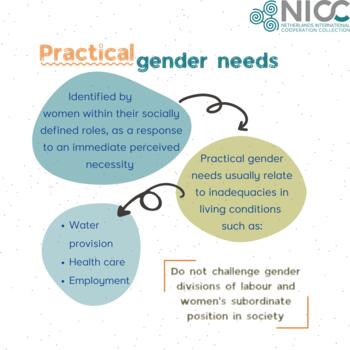 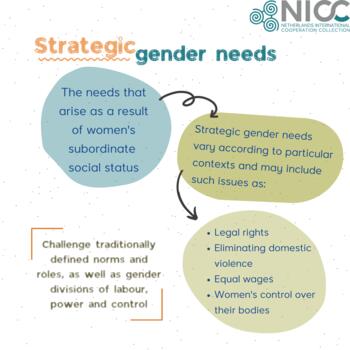 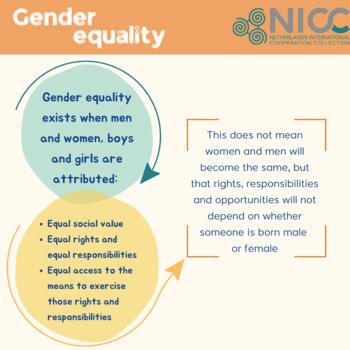 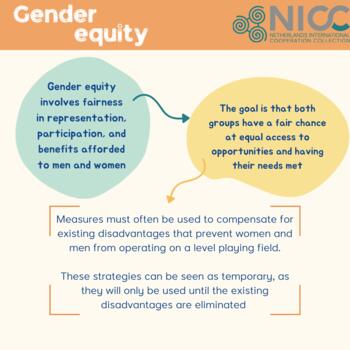 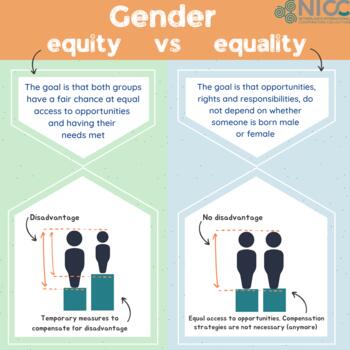 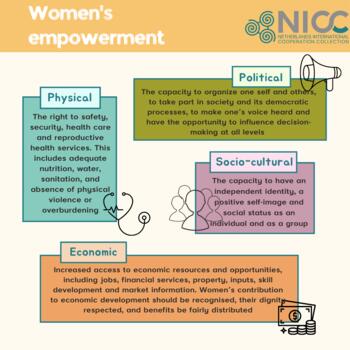