The banana industry is labour-intensive and demanding. Bananas are the most commercialised fruit in the world, with 15% of production exported and 85% going to domestic markets and family consumption. Over 75% of the world's bananas exports come from Latin America and the Caribbean.

Large multinationals have a lot of influence in the sector. Big retailers often offer large discounts on bananas to attract consumers to their supermarkets, sometimes even selling below cost price. Bananas are emblematic of the growing power of supermarkets along global supply chains and injustices such as:

The export of Fairtrade bananas to Europe began in 1996, first from Ghana (via French importers) and then from a cooperative of smallholders in Ecuador (so-called Oké bananas) with the help of the Dutch church-based NGO Solidaridad that had also been a major actor in developing the first-ever Fairtrade label (Max Havelaar), for coffee. Solidaridad established the company Agrofair in which it had a share and groups of small-scale banana growers in Ghana and Latin American countries were also shareholders and involved at Board level. Gradually this small Barendrecht based company, a pioneer in the introduction of fair-trade bananas, started to play an important role in the expansion of the fair-trade banana business, and other fair-trade companies followed. Particularly in the Netherlands and Switzerland, the demand for Oké bananas was immediately high.

However, there were many obstacles in a fresh fruit value chain that is dominated by multinationals, e.g. smallholders struggled with quality controls and were not always able to guarantee a regular supply, the logistics to collect fresh produce from many small plots were not easy and it was difficult to get access to adequate international transport and proper insurance, besides the market was not stable. However, the company succeeded and in 2004 Agrofair and the Italian Alternative Trading Organisation started the CTM Agrofair joint venture, importing fair and organic bananas into Italy. Later EkoOké bananas became also quite popular in Sweden and other European countries. Apart from promoting a bit more social justice in the banana business via fair-trade, these standards imply more than just a minimum guaranteed price and fair-trade premium. The fair-trade standards prohibit the use of nematicides and herbicides and manage a ‘black list’ of chemicals that cannot be used. In order to become certified, organisations of small producers need to comply with high standards in terms of sound and transparent administration, democracy and women’s rights. In that sense, fair-trade has contributed to strong organisations and empowerment. Beyond the standards, Agrofair and its suppliers make efforts to reduce their environmental impact and water footprints. Several banana plantations, e.g. in Nicaragua, that export their produce via Agrofair are certified by the Rainforest Alliance. In 2006 Agrofair also supported US partners, especially Equal Exchange, to launch Oké bananas in North America. Over time Agrofair Benelux tried to diversify its fair-trade imports with pineapple, mango, orange and avocado, but not with a lot of success. Agrofair remains mainly a banana company.

Currently, 94% of all fair-trade bananas worldwide come from Latin America. Fairtrade companies aim to empower banana growers by paying a Fairtrade Minimum Price and a Fairtrade Premium to plantation workers and small-scale farmers, whereby the extra income can be invested in the banana-growing business or in community projects.

The Fairtrade standards are designed to improve employment conditions and protect the rights of workers in large plantations. Moreover, Fairtrade supports smallholder banana growers to improve their bargaining position and income. 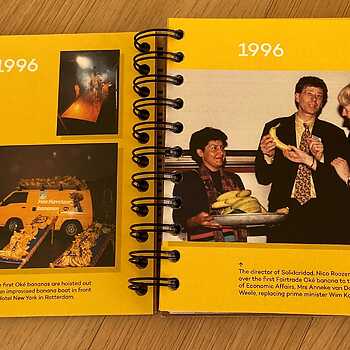 Booklet about the history of fair-trade…