Introduction
The development of the water sector did not follow one uniform pattern during this era but was in fact rather diverse. We will not attempt to describe water sector development around the globe but will instead focus on drinking water supply in Western Europe, using The Netherlands as an example and in West Africa, looking at Ghana. These cases, illustrating the industrializing nations on the one hand and the developing countries (or colonies rather, at that time) on the other, present a rather contrasting perspective on water and sanitation services development during this period.

Public water supply development in Europe was triggered by 19th century trends of industrialisation and urbanisation, the recurrence of devastating epidemics, particularly cholera, and the discovery that this disease, as well as many others, is water-related. Public water supply was enabled by technological innovations in water treatment, pipe manufacture and steam­driven pumping systems.

The history of water supply development in the Netherlands resembles that in other countries of Western Europe, particularly in Britain and France. In the Netherlands, the development of public drinking water supply was left to local initiative. Triggered by repeated cholera epidemics that savaged the Netherlands from the 1830s onward, the 1867 'Report to the King' describes the generally poor condition of water supply throughout the country and emphasizes the need for a national initiative. This advice was not heeded though, and it was not until 40 years later that the national government did step in. Until that time, local governments and private entrepreneurs established piped water supply systems. They did so particularly in the larger and richer municipalities where attractive rates of return on investment could be achieved. The necessary capital was made available either from municipal budgets or provided by local, British and Belgian financiers. By comparison, the provision of the rural municipalities stayed behind.

From 1910 onward this started to change. For the first time, funds were allocated to water supply at the national level. In 1913, a permanent advisory committee to the government and a national bureau were established to advise on and assist with drinking water supply development. Their concern was mainly with the development of rural, and particularly regional systems. These national initiatives, together with the reinstatement of financial autonomy for the provinces in 1905, created the necessary administrative and professional capacity at the supra-municipal level to further the extension of water supply coverage to the rural areas - a development which would take more than 50 years to be completed. Financial incentives, together with restrictive licensing policies at the provincial level in the 1920s, promoted the development of regional water supply companies. These companies were often constituted as public limited companies (PLC) with multiple municipal shareholders. The provincial governments, without revoking existing concessions, would only grant new ones to concessionaires that planned to set up regional utilities serving multiple villages. As a result of these measures, the number of municipal undertakings and private companies stabilised after 1930. At the same time, the number of regional companies grew, and so did rural coverage. By 1938, the number of water supply utilities reached its zenith at 231. Of those, 155 or nearly half were under municipal management, 41 under direct private management; and 32 were regional companies mostly set up as Public Water PLCs. In addition, there were three national water utilities serving strategic sites.

In 1957, the first Drinking Water Supply Act came into force. Apart from laying down sectoral planning guidelines and water quality regulation, the Act also required the reorganisation of the drinking water sector into larger units which would be able to exercise quality control and face new technical and commercial challenges. Amalgamation of water utilities into larger vertically integrated units under the Public Water PLC format was preferred, whilst horizontal integration with other utilities and other institutional forms were discouraged. The minimum recommended company size was 100,000 connections, or a supply of five million m3 of drinking water per year. The restructuring process was meant to be voluntary, but progress proved to be (too) slow. In 1975, the section of the law on reorganisation was amended to bring the concentration process under government control.

From then on, where deemed necessary, provincial governments were to lead the re-organisation and were given the task to prepare binding re-organisation plans. As a result, the process of amalgamation accelerated: the number of companies dropped from the peak of 231 in 1938 to 210 in 1950, 185 in 1965, to 105 in 1980 and 40 in 1994. In 1994, the average company had 145,000 connections and produced 30 million m3 of drinking water per year. Of the 40 companies operating in 1994, 32 were public water PLCs serving multiple municipalities. The other eight utilities serve single municipalities only. Of those, six were under direct public management, and two were under direct private management.

Piped water supply was introduced in Ghana only in the early 1900’s and until such time urban dwellers relied on rainwater, wells and ponds. The potential for urban water distribution was investigated earlier but technical and financial challenges precluded investments to actually take place. The outbreak of the bubonic plague in 1909 and a report on sanitary conditions in Accra alerted the British Colonial office on the alarming sanitary situation in the Gold Coast Colony. This served as a trigger for the first efforts to develop a public water supply in Accra. A sanitary administration and a public water supply system were considered the best way to safeguard the health and living standards of the European minority. The water supply system would also help prevent a further reduction of the “native population” which was already heavily decimated by the slave trade. The scarcity of population was regarded a bottle neck to economic development in West Africa and therefore it was considered of utmost importance to improve living conditions and protect the population from diseases and future plague outbreaks.

Public water supply in Ghana started in Accra where the system was inaugurated in 1914 serving a population of 22,572. Other towns followed and by 1936 piped water supplies had been installed in Cape Coast, Sekondi, Takoradi, Winneba, Kumasi and Tamale. Most people got their water for free from public standpipes and taps, which later proved hard to change. The more affluent individuals paid for an on-site metered connection and for water consumed. The systems were and kept being operated by the colonial government despite petitions for having them run by the city councils.

Scarcity of water, especially during the dry season was always a problem in Ghanaian cities. The strategy was to restrict water use by both information and rationing. In 1942, the wasteful use of water was framed as a national concern including the waste of expensive chemicals that had to be imported from the UK. In 1945, the first conference of the Directors of Public Works in West Africa was held, and for planning purposes the following daily consumption rates were advised: African population: 7 - 10 gallons per head, European population: 300 - 500 gallons per compound, and Hospitals: 20 – 30 gallons per bed.

In 1937, for the first time, a rural water supply section was set up in the Geological Surveys Department. The section installed boreholes and dug wells but was closed down after six years because of staffing and materials shortages that were attributed to World War II requisition of resources. A temporary water supply department was subsequently established and financed under the Colonial Development and Welfare Fund.

In 1948, the list of towns with piped water supply was identical to the one of 1936. The efforts in rural water supply focused on drilling boreholes, wells and water tanks, but the efforts were not quantified in terms of served areas or populations. It is reported that the urban water supply systems were continuously being expanded, but that progress was limited by the post war shortage of imported materials and manpower.

During the years 1953 to 1956, in the run up to official independence from the British Empire, an extensive survey of Accra found that the population of Accra had grown to about 200,000 people from 20,000 in the early 1900s. It also found that, except in houses built for non-Africans and wealthy Africans, basic amenities like electricity, water, kitchens, bathrooms and latrines were still lacking.

In summary, the development of public water supply systems during the colonial era was only started in the early 1990s and was largely limited to the urban areas where a pattern of inequality was established, both in terms of access to water supply and water consumption. Water supply visibly expressed social segregation and reflected colonial power structures.

The immediate post-independence era was a unique period in Ghanaian history. Political independence from the British colonial power in 1957, brought great expectations for the future of the nation. In this context, bringing water and sanitation infrastructure into the cities was perceived as part of a modernisation project and therefore was framed as a cornerstone in the building of a new and proud nation, “Ghana - the black star of Africa”. For the WSS sector this time period was important, as it saw the formation of national state water utility commissioned with the task of developing water and sanitation services for the newly independent nation. 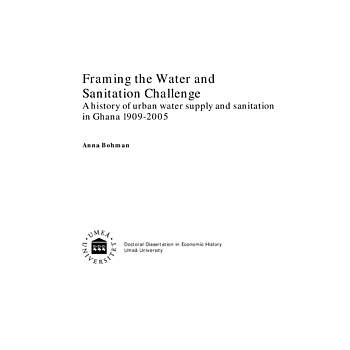 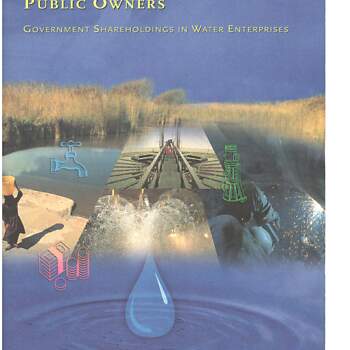 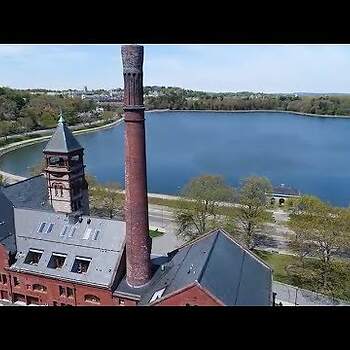