War-torn Yemen is among the poorest countries in the world, but recovery is possible if the conflict ends now, the UN Development Programme (UNDP) said in a report published on 23-11-2021. See link: Sources - Read More

Yemen has been mired in seven years of fighting between a pro-Government Saudi-led coalition and Houthi rebels, generating the world’s worst humanitarian and development crisis and leaving the country teetering on the brink of famine.

The report sends a hopeful message that all is not lost, arguing that its extreme poverty could be eradicated within a generation, or by 2047, if the fighting ceases.

The UN humanitarian affairs office, OCHA, has estimated 80 per cent of the population, or 24 million people, rely on aid and protection assistance, including 14.3 million who are in acute need.

Through statistical modeling analyzing future scenarios, the report reveals how securing peace by January 2022, coupled with an inclusive and holistic recovery process, can help to reverse deep trends of impoverishment and see Yemen reaching middle-income status by 2050.

Furthermore, malnutrition could be halved by 2025, and the country could achieve $450 billion of economic growth by the middle of the century.

While underlining the primacy of a peace deal, the report emphasizes the need for an inclusive and holistic recovery process that crosses all sectors of Yemeni society and puts people at the centre.

Investment must be focused on areas such as agriculture, inclusive governance, and women’s empowerment.

Auke Lootsma, UNDP Resident Representative in Yemen, stressed the importance of addressing what he called “the deep development deficits” in the country, such as gender inequality.

“I think it's fair to say that Yemen, whatever gender index you look at, it's always at the bottom,” he told UN News ahead of the report’s launch.

“So, bringing women into the fold, making them part of the labour force, and really empowering women also to contribute to the recovery and reconstruction of Yemen is going to be incredibly important”.

Yemen is facing a severe water crisis. While the current conflict has markedly increased Yemen’s water scarcity, Yemen was one of the world’s most severely water-stressed countries even before the conflicts. UNDP, through the Netherlands Enterprise Agency(RVO), requested Acacia Water to perform a literature review on water resources inYemen.

The current study highlights existing knowledge on water resources, identifies main knowledge gaps and recommendations towards improved water resources management. Specific attention in the literature study is given to three wadi catchments(Hadhramaut, Rima/Siham and Abyan Delta).As field studies in these areas are conducted prior to 2010, the existing data gap has been bridged by an additional unique approach using satellite and remote sensing data to derive updated water balances within the data scarce context of Yemen.The analyses helped to better draft concrete, usable and ready-to-implement recommendations.

Surface and groundwater form the main source of water in Yemen. Although rainfall is limited, being less than 50 mm along the coast and inland desert areas and between250-800 mm in the western mountainous regions, times of heavy rain bring about violent spate torrents and occasionally catastrophic floods causing damage to vital(irrigation) water infrastructure. During these floods only rapid recharge of shallow groundwater occurs due to the often steep slopes, sparse vegetation and limited soil permeability. In major wadis the rush floods ultimately drain into the sea.The groundwater resources, mainly consisting of the highly productive alluvial, sandstone, limestone and volcanic formations, are distributed throughout Yemen. Withan estimated 100,000 tube wells of which an increasing number tapping from non-renewable (deep) groundwater resources, about two-thirds of the irrigated areas inYemen rely on groundwater resources. Most of the illegal rigs/wells are found in water critical basins; Sana'a, Taiz, Tuban-Abyan, Middle Highlands, and Tehama, Ramlet al Sabatain, where most wells have gone dry and the average drop of groundwater levels range between 3-7 m/year.Estimates of the annual water demand for domestic (8%),industrial (2%) and agricultural (90%) use of 3.9 Billion Cubic Metres (BCM) far exceed the estimates on annual renewable resource from both surface water (1 BCM) and groundwater (1.5 BCM) of 2.5 BCM per year.To meet the growing demand, it is estimated that the total amount of water required in the next decade will be about 4.5BCM/y. 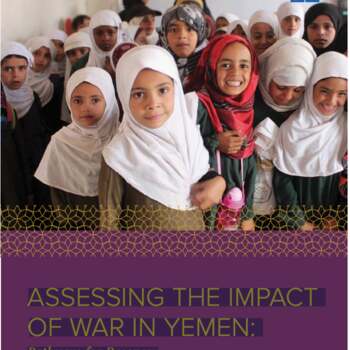 ASSESSING THE IMPACT OF WAR IN YEMEN:… 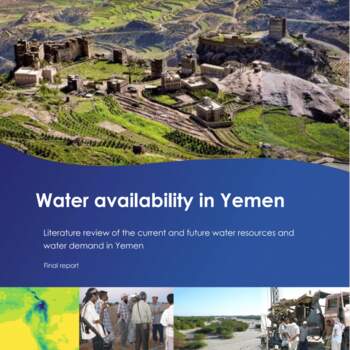