From about 2004, Dutch WASH interventions have specifically concentrated on realising simple, safe and sustainable drinking water and sanitation for poor people in developing countries who do not have access yet. Major policy elements in the overall programme included: integrated development of WASH systems; demand-driven; harmonisation with national policy and institutional frameworks; and technical, economical/financial and ecological sustainability of systems. The geographic focus of Dutch WASH policy was on Sub-Saharan Africa, but was not limited to this region.

The Dutch Ministry of Foreign Affairs set an ambitious goal in 2005: to help 50 million people attain access to WASH facilities by 2015. Official Development Aid turns into International Cooperation (reflected in the name DGIS) giving a position to private sector initiatives and encouraging public-private partnerships between financing parties (DGIS-private sector) and public private partnerships in receiving countries (P3SW program). Dutch Drinking water companies and Waterboards bundle their strengths in contributing via platforms like WaterfondsHolland, Aquanet, Vitens-Evides Int, Aqua for All and by individual Operator partnership Agreements with foreign water utilities. Other ODA-countries (Scandinavia, UK, Suisse, Germany, USA ao) have similar developments. The launch of a water sector broad Partners for Water program in several phases from 1999 to 2021 which includes both programs for transition countries as well as low Income Countries.

Around 2008, it became increasingly clear that the world was far behind schedule in reaching the MDGs. In the Netherlands the "Schokland Akkoorden" (2007) gave an extra push in efforts (and budgets) to accelerate the MDG-programs. 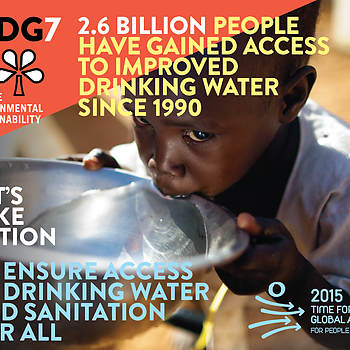