The North Yemen Civil War was fought in North Yemen from 1962 to 1970 between partisans of the Mutawakkilite Kingdom and supporters of the Yemen Arab Republic.

1962 - Imam Ahmad dies and is succeeded by his son, but army officers seize power and set up the Yemen Arab Republic, sparking civil war between royalists supported by Saudi Arabia and republicans backed by Egypt. (Source BBC Timeline Yemen)

The second half of the war coincided with a long drought, and the two forces in combination caused hunger, economic hardship, social dislocation, and many deaths in most parts of the country.

On the royalist side, Jordan, Saudi Arabia and Israel supplied military aid, and Britain gave covert support, while the republicans were supported by Egypt and were supplied warplanes from the Soviet Union.

South Yemen formed
1967 - Britain withdraws from the south after years of a pro-independence insurgency, and its former territories unite as the People's Republic of Yemen. (Source BBC Timeline Yemen)

1969 - A communist coup renames the south the People's Democratic Republic of Yemen and reorients it towards the Soviet bloc. (Source BBC Timeline Yemen). 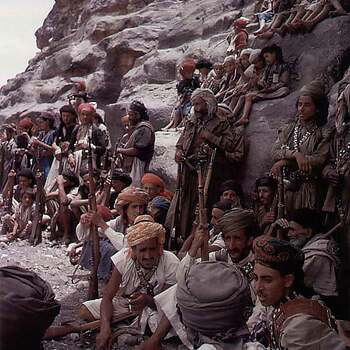