SWN 80
• Year of start Early 1980’s
• Who started? Government of the Netherlands
• Who funded? Ditto, plus various other donors
• Pump type Reciprocating handpump for shallow/medium-depth wells
• Pump range, depth 2m - 40m
• Cost of complete pump US$ 1,600 (average for 2m to 16m deep well)
• Where produced? The Netherlands, Tanzania
• Where applied? Africa, Europe
• How many installed in total? Approx. 26,000
• Technical lifetime of pump 25 – 40 years with basic maintenance

Lessons learned
The SWN family of handpumps was developed to fill the need for a durable pump suited for installation on shallow to medium-depth boreholes in situations where a reliable maintenance and repair infrastructure is lacking, as is often the case in rural Africa.

An important lesson learned was that, although being cheaper to produce, existing pumps such as the ‘Shinyanga’ handpump were very costly in maintenance and repairs. The objective thus became to develop a handpump that is as close to being maintenance-free as possible under local conditions. Even if these pumps are more expensive to purchase of produce, as a rule the decrease in maintenance costs more than offsets the additional expenditure.

Especially towards the end of the shallow wells projects in Tanzania much effort was put in increasing village participation related to preventive maintenance of the well, pump and well surroundings through the creation of Water User Groups (WUGs).

History
Between the years 1974 and 2001 several Dutch-funded projects for rural water supply were carried out in Tanzania. The first of these was the Shinyanga Shallow Wells Project (SSWP), where initially 700 shallow wells were constructed and fitted with handpumps. Whereas it had originally been the intention that handpumps would be provided by the Government of Tanzania, eventually the project had to produce these itself. This led to the so-called ‘Shinyanga’ pump, based on the ‘Uganda’ pump as introduced into Tanzania by UNICEF, but with a modified superstructure and entirely different cylinder assembly. This pump had a wooden superstructure and handle and was otherwise built up of standard galvanised iron pipes and fittings.

Within the SSWP itself this vulnerability was recognized, and efforts were made to limit the numbers of bearings to a minimum. This resulted in the ‘Kangaroo’ pump, a foot-operated direct-action pump. In this pump the pump superstructure was directly connected to the pump cylinder. A spring-loaded pump head was moved vertically by the user stepping on a foot plate, thus bypassing the need for hinges or bearings. Yet, the Kangaroo pump had its own shortcomings, as with deeper wells stronger springs were required, which made the pump difficult to use for smaller children. Moreover, corrosion protection of the springs proved to be difficult.

The development of the SWN 80 handpump – a handle pump – thus started in the early eighties in the shallow wells projects in the Shinyanga and Morogoro regions of Tanzania, once reliable alternatives for ball and roller bearings had become available. The part-time project leader at the time, Mr. C.J. (Cees) Bonnier, spent his time in the Netherlands by using the field experience gained in Tanzania for developing a ‘maintenance-free’ handpump. This was done jointly with the Sheltered workshop for the handicapped at Nunspeet, the Netherlands (SWN), which lent its name to the pump. SWN manufactured and shipped both complete pump units and spare parts to the shallow wells projects in Tanzania. A limited number of SWN pumps were also manufactured by these shallow wells projects locally.
The ‘family’ of SWN handpumps is based on a modular design with interchangeable parts. Main characteristics of the pumps are the use of corrosion-resistant materials and ‘over-dimensioned’ components, rendering these pumps virtually vandal-proof:
• hot dip galvanised steel pump stand;
• standardised hot dip galvanised pump heads, for application at specific ranges of pumping heads;
• interchangeable pump heads with journal bearings or standard commercial-size ball bearings;
• stainless steel pump rods with PE protection sleeves, in standard lengths of 3m, 2m, 1.5m and 0.75m;
• PVC riser pipes in standard lengths of 3m, 2m, 1.5m and 0.75m;
• thick-walled PVC pump cylinders with standard diameters of 50mm, 63mm and 75mm, with double-acting acrylonitrile piston sleeve.

Mr. Bonnier and SWN developed several modifications of the SWN handpump, but the bulk of SWN pumps are of the SWN 80 variety. With the conclusion of the Dutch-funded shallow wells projects in Tanzania the production of SWN handpumps was taken over by Calorama Rural Development Services and subsequently by VRM (Van Reekum Materials) of Apeldoorn, The Netherlands.

An unexpected development of the last 5 years is the application of the SWN 80 handpump at schools and children’s playgrounds in the Netherlands and Belgium. 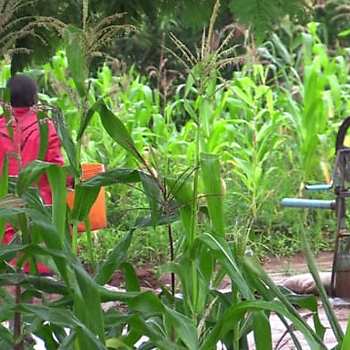 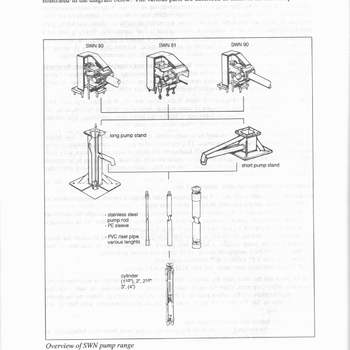