In May 2022, the Ministry of Foreign Affairs Liesje Schreinemacher announced the development of a Dutch feminist foreign policy (FFP).

In 2014 Margot Wallström, then Minister of Foreign Affairs of Sweden, was the first to announce a feminist foreign policy (FFP). This was followed by Canada, France, Mexico, Luxembourg, Spain and very recently Germany and Chile, with more countries working towards adopting an FFP (see ICRW press release1).

The launch of the EU’s third Gender Action Plan (GAP-III) in 2020 prompted the D66 fraction in the Senate to ask the Dutch government to investigate what lessons could be learned from the countries that already adopted a feminist foreign policy. In its answer (April 2021) the Ministry of Foreign Affairs (MFA) agreed to explore the opportunities, possibilities and challenges of a feminist foreign policy for the Netherlands, see the concerned Senate document2.

Although countries do not define their feminist foreign policy all in the same way, a common notion is “the direct link between gender equality and (socio-)economic welfare and national security”. A main principle of FFP is addressing the root causes of gender inequality and unequal power relations, i.e. aiming for (gender) transformative change. Another common principle of an FFP is addressing other forms of inequality, including poverty, the climate crisis, etc. An ‘intersectional’ FFP is often strived for, placing gender, racial, social, climate, and economic justice at the heart of a country’s foreign policy. FFP places the voices of those who have historically been least represented, but are often most impacted, at the centre of policymaking. A proper FFP is seen as based on consultations and participation and requires committed high-level leadership. Most FFPs apply to all areas of foreign policy including diplomacy, trade, development cooperation, and security.

MFA’s actions in 2021 and 2022: MFA asked WO=MEN, the Dutch Gender Platform, to collaborate in organizing a consultation on FFP with civil society partners and experts. This was held on the 8th of July 2021 through an online meeting, resulting in a report with suggestions and conclusions3. MFA also commissioned a study on the experiences of other countries with FFP and recommendations for the Netherlands for adopting an FFP. The comprehensive study report with lessons learnt from four countries and detailed recommendations was submitted on 31st August 20214.

The report concludes that a feminist foreign policy can have substantial added value for the Netherlands if done well. It can give an enormous impetus to the commitment to gender equality, embedding gender mainstreaming more structurally in all aspects of foreign policy, which will be enabled by both political authority and an unambiguous narrative. This will contribute to the effectiveness, credibility and reputation of the Netherlands in the field of (gender) equality and human rights. A broader understanding of gender, intersectionality and power relations will also enhance the quality and effectiveness of MFA’s work.

A main recommendation for the development of an FFP is to provide clarity about what such a policy involves, including how the term ‘feminism’ is defined. The report provides two sets of other recommendations, which relate to (1) leadership, ownership and public support; and (2) transparency, structure and capacity. These recommendations include the explicit political commitment to FFP at all levels; integrating attention to intersectionality, antiracism and decolonization; and ensuring policy coherence and consistency, also in domestic policies (‘walk the talk’).

On May 13, 2022, the Ministers of Foreign Affairs and for Foreign Trade and Development Cooperation (W.B. Hoekstra and Liesje Schreinemacher) submitted their formal answer to the above mentioned question in the form of a letter to the Senate (‘kamerbrief’).  This letter5 presents the main features of the FFP study report and the Ministers’ policy response. They support the potential added value of an FFP, recognizing that the Netherlands belong to the forerunners for international agreements on gender equality and antidiscrimination, also recognizing current gaps in integrating gender equality in all areas of international involvement of the Netherlands. In this letter the Ministers explicitly opt for a feminist foreign policy. They will address opportunities and gaps for such a policy in the near future. To ensure a meaningful implementation of this policy, the letter announces broad consultations. The Ministers conclude their letter by ensuring that the Parliament will be kept informed about the further design of the Dutch FFP. 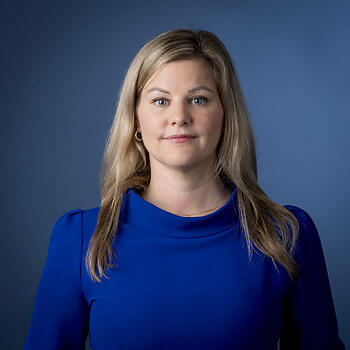 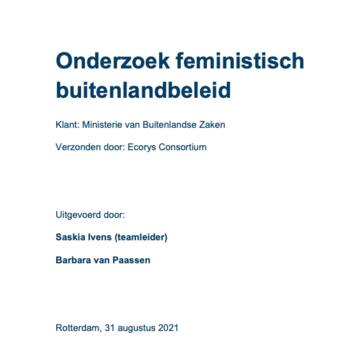