Following the Schokland agreements of 2007, the Netherlands' Government set up a special fund to speed up the achievement of MDG3: promoting gender equality and empowering women.

In the course of 2007, a series of country-wide consultations were held on the future of Dutch development cooperation. These culminated in the so-called Schokland agreements, Schokland referring to the first UNESCO World Heritage Site in the Netherlands, where the agreements were signed.

One of these agreements reflected the recognition that abolishing the stand-alone budget for women’s rights and gender equality in the early years of the new Millennium had not been a wise decision. Amidst increasing conservative opposition that was threatening what they had fought over for years, women’s organisations in developing countries had seen their resources decline at a time when the realisation of MDG3 concerning gender equality was seriously lagging behind. Moreover, gender mainstreaming was not living up to its promises.

The MDG3 Fund was introduced in 2008 against the mentioned background of declining funding for women’s organisations in developing countries and slow progress in realizing the MDG3. Its overall objective was to achieve ‘improvements of rights and opportunities for women and girls in developing countries’ by funding projects that would contribute to concrete improvements in rights and opportunities for women and girls in Africa, Latin America and Asia. The Fund focused on four priority themes, i.e. securing property and inheritance rights for women, promoting employment and equal employment opportunities for women, increasing women’s participation in politics and public administration and stopping violence against women.

The evaluation set out to address the OEC/DAC criteria of effectiveness, sustainability and efficiency. In doing so, several methodological challenges were encountered. These prompt the reader to treat the data presented in this report carefully and to accept that the results presented are primarily illustrative. The methodological challenges are related to the following. First of all, the ministry opted for a ‘monitoring light’ approach. Secondly, in line with international agreements on effective donor support (Paris (2005) and Accra (2008)), no monitoring framework was imposed based on the assumption that the MDG3 Fund grantees would have sufficiently sound monitoring and evaluation systems. In practice, however, these systems provided data only at the activity and output level. Sufficiently reliable evaluations done by the grantees were rare. This evaluation was not able to fill the resulting data caveat. It could only provide information that could be verified during interviews and short field visits at country level. As a consequence, information on outcomes and their contribution to women’s empowerment is anecdotal; impact evaluation was not possible.

Empowerment is central to the concept of gender equality and is a term that was introduced in the Beijing Platform for Action of 1995. According to Kabeer, empowerment is a process by which those who have been denied the ability to make choices acquire such ability. 3 Power is conceptualised in terms of people’s capacity to make strategic life choices and exercise influence. It is furthermore worth recalling that: (i) ‘(a) woman’s level of empowerment will vary, sometimes enormously, according to other criteria such as her class or caste, ethnicity, relative wealth, age, family position, etc.’ (Mosedale (2005): 244); (ii) when talking about strategies of empowerment, structural gender inequalities cannot be addressed by individuals alone and that women’s organisations and social movements have an important role to play in creating the conditions for change (Kabeer (1999)); and (iii) that context is crucial in both defining and measuring the impact of women’s empowerment on development outcomes. 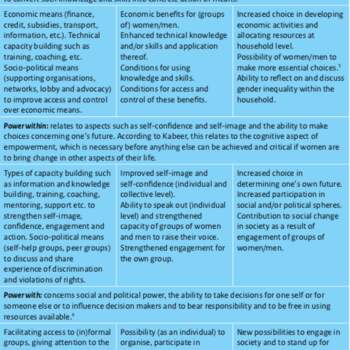 Overview of dimensions of empowerment…