The Policy and Operations Evaluation Department (IOB) report focuses on attention to women’s rights and gender equality in the international policies pursued by the Netherlands in the period 2007-2014. The report not only talks about policies but also to reflect on the results that have been realised.

At a policy level, gender mainstreaming has been propagated in a range of policies and programmes, clear examples being the attention paid to women in land rights and food security policies and to the education of girls in education policies. At the same time, gender mainstreaming has not been consistent across sectors and priority themes. For example, women’s rights and gender equality were given minimal or no attention in e.g. the policy documents concerning private sector development in developing countries (2011), corporate social responsibility (2012), or the international security strategy (2013). The international literature demonstrates that when this is the case at the policy level, gender mainstreaming in policy implementation is unlikely to happen.

Limited information on the effectiveness

This evaluation shows that there is limited knowledge of the effectiveness of Dutch gender policies. At times, projects were still in an early stage of implementation and had not yet produced any significant results. However, a general tendency is that reports and evaluations rarely go beyond informing on the activities carried out. To a lesser extent, they provide information on the outputs realised in terms of numbers of women reached by training, awareness campaigns and/or community dialogues, numbers of women provided with medical and other care and shelter, etc. In an area like combating VAW, there is limited evidence that points at increased knowledge on VAW, on its unacceptability and on how to deal with it. At the same time, it was found that women were often afraid to take action for fear of losing reputation and of community backlash.

As the evaluation of the MDG3 Fund (IOB, 2015a) shows, it is unlikely that many of the smaller (women’s) organisations that have been (co-)financed by the Netherlands will be able to sustain their activities without external support. Both institutional and financial sustainability remains weak, in most cases because of the absence of clear capacity development strategies, the short timeframe available for such capacity development, as well as the persistent difficulties in getting access to money. The area of combating violence against women is a case in point. In many countries, governments are unable and at times also unwilling to live up to their international obligations. In reaction to this, many women’s organisations and NGOs have filled the gap in supporting survivors. As the government is not able or willing to support these organisations, they remain dependent on external funding. This hinders their financial sustainability.

From discourse to practice

The time has come to move beyond rhetoric and to start making gender mainstreaming (as stressed in the Beijing Platform for Action) a reality. This means that gender issues should be included in the design and implementation of all policies, programmes and projects, and not just in those dealing with women or SRHR. It also means assigning accountability for gender mainstreaming, not only within the Ministry but also at the level of partner organisations, both within and outside the Netherlands.

Awareness of these context-specific differences is essential and reconfirms the importance of contextualised gender analyses when preparing interventions: there is clearly no ‘one size fits all’. Context matters a great deal; what works in one setting for one particular target group can be counterproductive in another.

Education as a starting point

Basic literacy and numeracy skills are essential preconditions for women to participate in economic development, to become aware of and gain access to their rights, and to participate in a meaningful manner in politics. Educating women to build their confidence and allow them (better) to claim their rights, both as girls and as adults. Without education, women cannot empower themselves – the same holds for boys and men.

Include men in the process

Multiple gender-related problems at multiple levels call for comprehensive interventions. They also call for collaboration with a variety of stakeholders, including with the other half of the human species in the gender equation: men. Gender equality is not just about women; it is about the power dimensions between women and men. These dimensions can differ per culture, thematic area, or social group. 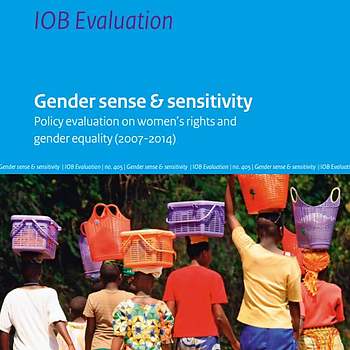