The history of Egyptian agricultural development and drainage is one that pre-dates the 1960’s. Being a country and civilization built around a major water source, the Nile, agriculture has always been an important sector. A short summary of the important milestones in the century before the building of the High Aswan Dam will provide more context to the country’s challenges and development.

A first major step in regulating the Nile flow was the construction of the Delta Barrages at the two branches of the Niles at the beginning of the 19th century under the ruler and developer Mohamed Ali Pasha (1805-1845), the first leader after the evacuation of the short French colonial era (1798–1802).

Drainage problems like waterlogging and salinity increase led to a so-called “cotton crisis” in 1909. The state responded by excavating local drainage canals.

In 1913 the national Ministry of Agriculture was established and in 1914 the Ministry of Public Works was created. The establishment of these two ministries meant an effective separation of responsibilities on agricultural development and irrigation development. The needs to maintain communication over related issues between the two ministries would also present itself as a recurring problem.

After 1952, when the monarchy was abolished during the revolution led by Abdel Gamal Nasser, agricultural development was transformed into a period of introducing socialist principles and practices. The public sector played an increasingly large role in this transformation. During this period agricultural cropping patterns became regulated and wheat, cotton, and other big agricultural commodities were acquired by the Egyptian government. This transformation was influenced by the strong cooperation between Egypt and the Soviet Union. The Soviet Union became a major financial donor in a partnership that started around 1953 and would last until the construction of the High Aswan Dam. 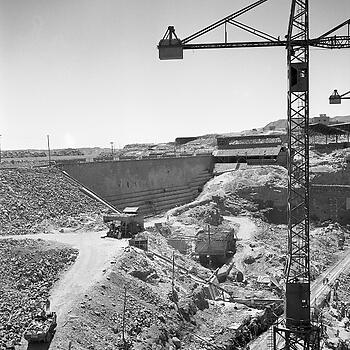